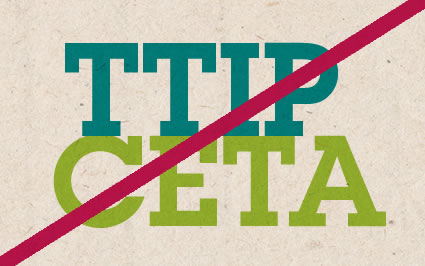 A trade deal as dangerous as the Transatlantic Trade and Investment Partnership [TTIP] has been agreed between the EU and Canada, and is about to come into force.

The EU commission is trying to fast-track this deal so it becomes law before Parliament has scrutinised it in Westminster. We need stop this happening to avoid serious consequences for our democracy and public services.

Just like TTIP, the Comprehensive Economic and Trade Agreement [CETA] will give corporations new powers to sue governments through special corporate courts. And even if the British parliament rejects CETA, these corporate courts could remain active for several years.

CETA’s 1,600 pages show us that it’s a threat not only to our food standards, but also to the battle against climate change, our ability to regulate big banks to prevent another crash and our power to renationalise industries.

Public services are particularly at risk because the deal will make it more difficult for future governments, national and local, to prevent Canadian companies from taking over public services in the EU.

WHY WE NEED TO ACT NOW

CETA has already been agreed by the European commission and the Canadian government and it now awaits ratification over the next 12 months.

We believe CETA should be stopped. But it’s a race against the clock.

CETA could take effect in Britain early next year without a Westminster vote. We could face a ‘corporate court’ case from Canadian multinationals before our parliament has had the chance to agree to the deal – or throw it out.

Email your MP and get them to sign Early Day Motion 165 on CETA.

“The parties agree to the establishment of five-year fixed-term Parliaments. A Conservative-Liberal Democrat coalition government will put a binding [Early Day] Motion before the House of Commons in the first days following this agreement stating that the next general election will be held on the first Thursday of May 2015. Following this motion, legislation will be brought forward to make provision for fixed-term parliaments of five years. This legislation will also provide for dissolution if 55% or more of the house votes in favour.”

As I see it, this statement only refers to providing a vote for the dissolution of parliament, that is, the calling of a general election, by the RULING Government.

At present, Parliament can be dissolved by ONE PERSON, namely the Prime Minister.

To ensure the 5-year fixed term life of the new Parliament, this clause gives the Lib-Dems some measure of security in the ConDemNation as the Tories, currently with their 47% of MPs, could easily change the rules of engagement for the Coalition by finding the outstanding 3% needed to dissolve both the coalition and Parliament from within the other groups.

And what seems to have been forgotten is that in the Scottish Parliament, 66% of Members need to be in favour to dissolve itself.

I believe that a successful vote of no confidence [by a simple majority] in the Govenment proposed from the OPPOSITION benchs would still bring the Govenment down and lead to a General Election.

This has been the unwritten convention since 1782 – that a significant defeat on a major issue can lead to a vote of no confidence in the government. If the prime minister loses that vote he is then obliged to resign, or call a general election. This happened twice in the last century – the last time when the Scots Nats brought down Jim Callaghan’s Labour government in 1979.

In a briefing note on the proposed changes prepared for Left Foot Forward by UCL’s Constitution Unit, Robert Hazel agrees with me:

“The Conservative-Lib Dem coalition agreement proposes a 55% threshold before Parliament can be dissolved. This is intended to strengthen the hand of the Lib Dems: Cameron could not call an early election without the consent of his coalition partners, because the Conservatives command only 47% of the votes in the Commons.

UPDATES:
House of Commons Briefing Paper on Fixed-Term Parliaments Bill [RP10-54], prepared to inform the Second Reading debate on the Bill and  published on 26 August 2010, can be downloaded from here.

There Briefing Paper  outlines the provision to allow The Prime Minister, by Order,  to extend or shorten the period between General Elections by up to two months. Parliament would be dissolved 17 days before the date of the General Election.

Fixed-term Parliaments Act 2011 was introduced to the House of Commons on 22 July 2010 and received Royal Assent on 15 September 2011.

The Act fixes the date of the next General Election at 7 May 2015, and provides for five-year fixed terms. It includes provisions to allow the Prime Minister to alter the date by up to two months by Order. There are also two ways in which an election could be triggered before the end of the five-year term: