We all have our different methods of delivering leaflets and letters.

I try to work it so that the leaflet lands the right way up on the doormat. A couple of attempts and I normally get it to work.

And I always push the leaflet so it drops – I know that I get frustrated by deliveries that leave the literature poking out of the letterbox. It advertises the fact that you’re not at home…

Rachel likes to listen to her iPod while I prefer to take in my surroundings.

So I push envelopes through letterboxes in Exwick, I get a chance to think about the whole process of deliveries…and canvassing.

I’ve already posted my feelings on letterboxes. I must reiterate that I hate those at the bottom of doors and those that are mounted vertically.

Often you need to get inside to access the letterboxes in the internal doors – but how? Many have an intercom system linked directly to the flats inside. But buzzing the occupants can cause annoyance if they don’t want to receive your message – and that can mean others in those flats miss out. Some may have trade buzzers for daytime use – but when are they in use? Why can’t there be an exterior letterbox for each flat instead?

But often there is a letterbox on the exterior door, mean that the leaflets sit onthe communal floor. Are they cleared away en masse? So others in the property once again miss out on the message?

My campaign manager, John Pragnell, has a thing about bells.

Many flats have bells – but which bell is linked to which flat? The bells aren’t labelled, and if they are it’s probably in the name of a previous occupant. And is the bell actually working? How long to wait before a strong knock on the door?

Another bete noir. Numbers on houses?

I feel that every house should have a number that is visible from the street. House names don’t work – they make identification difficult. Much better to have a clear number. It is frustrating to climb a series of steps to find that its the wrong number. Who’d be a postie?

And why do Exeter streets have differing numbering systems?

Some are odds and evens on opposite sides (this is the normal system) as found around the rest of the country. But others are consecutive. Both systems operate side-by-side, often in adjacent streets. And to confuse matters more, often the corner house isn’t really on the street you thing it is. For example, I deliver to a door is on York Road, yet its address is 1 Leighton Terrace. 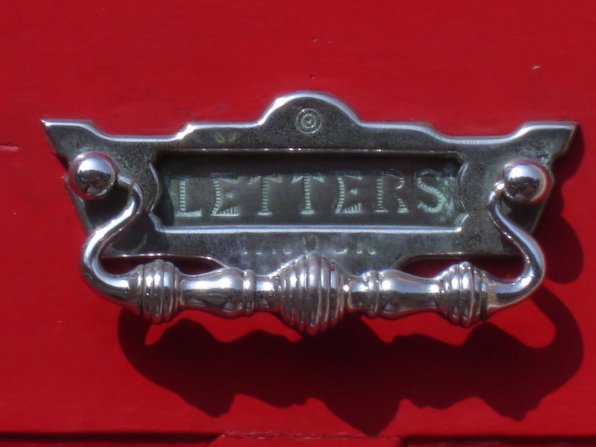 Out on leaflet rounds this morning – delivering my A3 Newsletter and the “Exeter Parish Council” leaflet.

As ever I am astonished by the range of sizes and shapes of letterboxes.

My favourites are always placed at waist height, no bending down to ground level. Horizontal ones always easier to use that vertical ones – not sure why. Brushes behind the flap tend to impede the process of pushing the leaflets through – all our beautiful artwork gets crumpled up.

The real danger is the secondary flap on the inside. During the campaign in Alphington last year, I heard a dog thundering up the hallway, so I quickly removed my hand. Caught the index finger of my right hand on this secondary flap and ripped the fingernail off. Spent 2 hours in casualty at RD&amp;E on Saturday afternoon.

But the biggest bugbear is the size of the letterbox. How can students (and others) cope with a flap is barely big enough to receive a postcard? 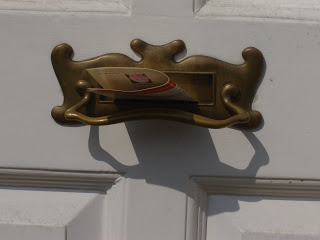 The image above is one of the smallest on the delivery round – the A3 leaflet, already folded in to 3 (by our wonderful machine) has to be folded into half to get through the opening.

By contrast, I always enjoy using the letterbox below. It is wide enough to post an A4 leaflet sideways and high enough to take the whole delivery in one go. Certainly no trapped fingers in that one. 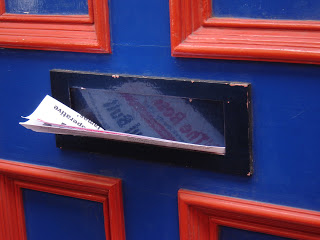