The Prime Minister unveiled plans for new homelessness prevention schemes, including targeted support for those at risk of sleeping rough. 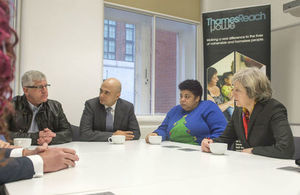 Prime Minister Theresa May and Communities Secretary Sajid Javid today provided a £50 million funding boost for trailblazing new homelessness prevention schemes across the country, including targeted support for those at risk of rough sleeping.

On a visit to Thames Reach Employment Academy in Southwark this morning, Theresa May and Sajid Javid announced details of winning bids set to benefit from the total £50 million government funding announced earlier this year.

The successful proposals submitted by local authorities include plans for improved collaboration between different agencies to better identify at risk households, targeting interventions well before they are threatened with eviction.

In the run up to Christmas, images of soup kitchens and hostels remind us of the vital lifeline provided by charities and local services to those facing a night on the streets.

But today I have witnessed a different kind of support, one which seeks to stop people ending up on the street altogether by providing assistance to address their most immediate needs and crucially giving them the skills and opportunities which can help them build a more secure future for themselves.

Services like those I have seen today are vital in helping everybody realise their potential, no matter what their personal circumstances as we create a country that truly works for everyone.

The work that Thames Reach does to tackle homelessness shows the wide range of services that the most vulnerable people in our society often need. Their efforts are proof of the real difference that can be made when charities, councils and volunteers work together.

That’s why we’re making this £50 million funding available across the country this Christmas for ambitious programmes to prevent homelessness in the first place, so that by next year many more people will have been helped to get their lives back on track.

Birmingham has been given a £1.7 million boost to prevent homelessness which could help up to an additional 9,000 people by tackling the root causes that can lead to someone losing their home. Proposals include a new Partnership Board to take responsibility for homelessness services across Birmingham, new dedicated teams to support vulnerable people leaving custody and hospital with no fixed address, and specialist early advice through Web chat, Skype and phone calls for anyone who thinks they might be at risk of losing their home.

Brighton have been awarded £352,344 to fund a Dual Diagnosis worker to support rough sleepers with both substance misuse and mental health needs, and a navigator worker to help those new to the streets or experiencing hidden forms of homelessness to get the emergency accommodation and support they need.

Eight areas will benefit from a share of £10 million in locally commissioned Social Impact Bonds to help long-term rough sleepers with the most complex needs.

Housing First is based on the principle that housing is an individual’s primary need, providing permanent accommodation for those currently sleeping on the street before addressing wider support needs. Pilots will form part of a wider evaluation of how a similar approach could be implemented in the UK, as part of a fresh approach to tackling homelessness.

Funding grants to local authorities will place a focus on better prevention, so that more people receive help before they reach a crisis, increased early intervention to get rough sleepers off the streets quickly, and greater specialist support for entrenched rough sleepers.

The new programme builds on the government’s commitment to preventing homelessness, which includes:

Further information:
A full list of funding allocations can be found on GOV.UK.

Exeter gets share of £654,000 to tackle homelessness and rough sleeping

Tackling homelessness and rough sleeping in Exeter received a big boost today with news that the city has won part of £654,000 government funding.

Working closely with homelessness providers and partners in the community and voluntary sector, along with East Devon, Mid Devon and Teignbridge District Councils, Exeter will receive a share of the pot to help prevent homelessness through innovative solutions and tackle rough sleeping in the city.

Cllr Emma Morse, Lead Councillor for Customer Access, said the grant was a fantastic early Christmas present for Exeter. “We are committed to ensuring that everyone in Exeter has a roof over their head and that rough sleeping becomes a thing of the past.

“There is much work to be done but this money will help us work with those threatened with homelessness so that we can prevent it happening in the first place.”

• Exeter City Council working with EDDC, TDC and MDDC, as well as homelessness providers such as Julian House and St Petrocks, has won £295,000 to help tackle rough sleeping.

The grants will help the local authorities to understand why people are on the streets, their life experience and how best they can be assisted to move away from living on the streets. There will be a strong emphasis on prevention, finding solutions for families and individuals before they end up sleeping rough.

The initiative will focus on reducing unnecessary duplication between services and the introduction of early targeted support for those at risk and experiencing issues such as redundancy, illness or disability.

The new programme will work with a wide range of partners, across councils, the community sector, hospitals and the courts system to prevent households from homelessness through direct support and assistance. The overriding focus will be on the individual being encouraged to take ownership of their own housing need.

Today’s funding comes from the new £50 million programme to provide an innovative approach to tackling homelessness, with prevention at its heart, announced by Prime Minister Theresa May and Communities Secretary Sajid Javid in October.

I am writing as a constituent to ask that you raise with the Chancellor of the Exchequer and Secretary of State for Communities and Local Government the importance of protecting the Homelessness Prevention Grant in the upcoming Spending Review.

This fund, worth £80 million annually, is used by local authorities across England to provide vital services like debt advice, mediation with landlords and help to find new accommodation, which have prevented hundreds of thousands of people from becoming homeless.

Though the money is not ring fenced, the fact that it is a named grant has helped focus funding on the crucial services it is intended for. Around 80% of all Housing Options and Homelessness services currently receive the full grant allocation and 90% say that money would get diverted elsewhere, and services damaged, if it were no longer a named grant.

Protecting the grant makes financial sense as well as being the right thing to do. While homelessness costs the government £1 billion annually, tackling it early could save between £3,000 and £18,000 for every person helped.

Since 2010, ministers have emphasised the crucial role the grant plays and protected it from cuts. Homelessness minister Marcus Jones recently told parliament its impact is “powerful” in stopping people from becoming homeless.

Even so, with deep spending cuts planned, this funding is at risk.

I would therefore be grateful if you could ask George Osborne and Greg Clark to:

1. Protect the Homelessness Prevention Grant until 2020 in the upcoming Spending Review
2. Allocate the grant according to levels of need in each local authority
3. Monitor how the grant is spent, to help make sure it is used effectively and for what it is intended

For further information on the Homelessness Prevention Grant, please see this briefing from Crisis: http://www.crisis.org.uk/data/files/publications/Homelessness%20Prevention%20grant%20briefing.pdf