At the star-studded RHS Britain in Bloom National Awards gala event held at Edgbaston Cricket Ground on Friday night [14 October 2016], Exeter was awarded a Silver Gilt Medal for the work done across the city and university during the year.

This was the first time for 25 years that Exeter has been in the National Finals – and this year Exeter represented the whole of the South West in the ‘Small City’ category (a category which included Harrogate, Canterbury, Derry, Loughborough, Colchester and Rugby).

Each of the 3 core elements of Exeter’s Award are scored separately: Silver for Horticultural Achievement ; Silver for Environmental Responsibility; and GOLD for Community Participation.

The two National judges were impressed by the strong horticultural links based on the famous Veitch family of Exeter and said that the university grounds were ‘just spectacular’, so much so that they intend to visit again just to enjoy a private tour of the trees and shrubs

There was particular praise for the hanging baskets in the High Street and Gandy Street, funded by The Exeter Business Improvement District (BID) and for the BID’s team support for cleansing services in the city centre. And Princesshay’s Roof Garden and Bee Hives were singled out for special praise.

Andy Littlejohns, Operations Manager of Princesshay, said, “This Award is a fantastic achievement and we were very pleased to have been involved in the whole process.”

Exeter’s Britain in Bloom team is a strong partnership between the city council staff, volunteers and the University who hosted community groups, welcomed the National Judges and showed off their superb campus:

University of Exeter Director of Grounds, Iain Park, said: “We are very proud to have contributed to Exeter’s Britain in Bloom success. To receive this kind of recognition is wonderful news and reflects the hard work that our dedicated staff put in to maintaining the University grounds to the highest standard. The city has so many wonderful areas for both the local community and visitors to the city to enjoy.

“Both the Streatham and St Luke’s campuses have also been bestowed with Green Flag awards this year, which signifies to the city and its visitors that the University’s grounds are kept to the upmost quality and are wonderfully maintained for everyone to enjoy.”

Exeter in Bloom’s community contribution was supported by a grant of £2,000 from The Exeter Board Fund to engage with the 26 individual It’s Your Neighbourhood grass-roots community entries who among them achieved ten ‘Outstanding’ awards. The judges said, “The presence and support of Exeter’s numerous community groups was tremendous.”

“Time and time again, I see the work of local residents transforming their neighbourhoods and making a difference in their communities. Many local projects have been taking place around the year by local volunteers, and I’ve managed to join some of these in recent months. The award of the Silver Gilt for Exeter is recognition of all this tremendous effort.”

Christine Fraser and Paul Collier, leading Exeter in Bloom, were presented with a special flag to be flown in the City and a special banner is in the post.

Retiring from managing Exeter in Bloom, Christine Fraser said, “It has been a pleasure and a real privilege to be linked to over 300 volunteers across the city contributing so much to improving areas where we all live and work. We wish Stella Cahill, who will be taking over this role, every success in the future”.

Christine Fraser remains on the RHS South West in Bloom Committee and will continue to enjoy her regional judging role during her retirement.

The City of Exeter was chosen to represent the South West in the Small City category in 2016 RHS Britain in Bloom National Competition and will up against Harrogate, Loughborough, Rugby, Colchester and Canterbury.

The whole project – featuring volunteers across the city – was co-ordinated by the Exeter in Bloom team, led by Christine Fraser.

Checking the engravings, it appears tha Exeter was the very FIRST winner of the trophy in 1973! Since then, Exeter has won the trophy 10 times.  So, excluding Plymouth and other occasional winners, the current score is:
Exeter 10 – Bath 12!

The success is  a real tribute to the collaborative efforts of Council staff, University of Exeter grounds team, some generous business sponsors and the host of green-fingered community volunteers

It’s Your Neighbourhood [IYN] Community Awards were presented to our volunteers by The Lord Mayor of Exeter at the Guildhall celebration on Wednesday 12 October. 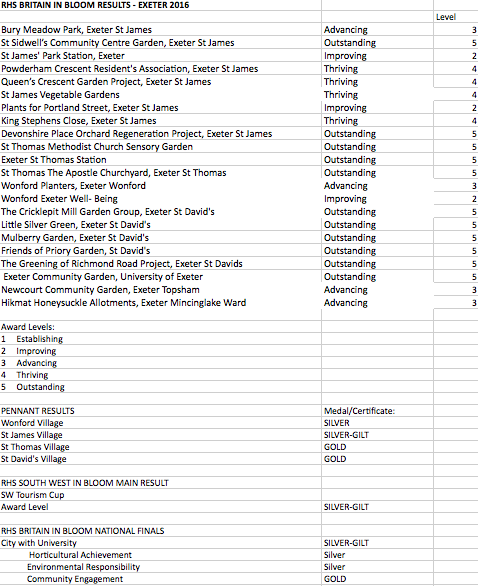 And at the national Britain in Bloom gala awards ceremony – held in Birmingham on 14 October – Exeter’s entry was awarded SILVER GILT.
What the National Judges said about Exeter: ‘From the start of it appeared that most of Exeter was involved and engaged with Bloom – from the City Council, Devon Wildlife Trust, University of Exeter, BID Exeter and many for. Their enthusiasm and commitment to Bloom is amazing…’
They go on to say. ‘The university grounds were just spectacular and the collection of different specimen trees was just amazing…’
The judges commented on the BID’s cleansing vehicles in the City Centre; the excellent Princesshay roof-top garden and bees, and on Community Participation they said: ‘There are too many to mention and they need congratulation – their presence and support was tremendous’.

As Exeter City Council’s Lead Councillor for Communities and Neighbourhoods, it’s great to note that the Exeter entry was classified GOLD for community engagement. I understand that the RHS Head of Communities came over to the Exeter table at the gala dinner to comment on that achievement.

For me, I want to give thanks for all the hundreds of volunteers to worked to make a difference in their communities – the award of the Silver Gilt is just a part of marking their achievements.

St Thomas was presented with a Gold award in the Town To City  Pennant [South] category for RHS South West In Bloom  competition at a reception hosted by the Lord Mayor of Exeter at Exeter Guildhall on 12 October 2016.

The feedback forms from the judge [see above] indicate that they were particular impressed by the diversity of the trees in St Thomas which was apparent during the tour on the day – and he did make specific mention of the need to ensure that we have succession planning in place for the trees so something for us all to think about.

South West in Bloom is not just about gardening and flowers, but about the local community, the environment, heritage and sustainability.

As Exeter City Council’s  Lead Councillor for Communities and Neighbours, I see that the work of local communities can help transform their neighbourhoods, so it is great to see the work undertaken by local residents and communities in St Thomas recognised beyond the city’s boundaries. This is a tremendous achievement so thanks are due to everyone involved, but especially the work of the Bloom’In St Thomas group in co-ordinating this work has to be gratefully acknowledged.

Many local projects have been undertaken around the year by local residents and community groups, including the greening up of St Thomas Station, the planting of the community orchard in Cowick Barton playing fields, refurbishment of the Gate House in Pinces Gardens and the St Thomas Tree Trail, to name but a few.

It has been great to join in the work with enthusiastic volunteers – whether weed clearing and planting of wildflower seeds at St Thomas Station:

or just litter picking in the area around St Thomas Pleasure Grounds.

Not only did St Thomas receive a Gold award, but all four projects entered in the  It’s Your Neighbourhood competition received Outstanding awards.

For further information on the Bloom’In St Thomas group, contact them via  e-mail at: stthomasinbloom@gmail.c