We’re good recyclers here in Exeter. Better than the stats would suggest.

As such good recyclers, you will be aware, naturally, that the EU has set a target as part of the Waste Framework Directive of achieving a 50% recycling average across EC countries by 2020, and that any country not seen to have done its bit to make this happen will be fined. Yes? …No? Well, it’s true.

Accordingly, the UK government has dictated that the UK’s average recycling rate must hit 50% by the time Big Ben chimes in 2020.

Wales’ recycling rate shot up by nearly 11% in this period.

Northern Ireland scrambled up a tad shy of 6%…

…and bringing up the rear, perspiring, panting: England, which didn’t even make it 4% further up the mountain in five years. This is all the less impressive considering more than half of it came in the first year (2010-11). 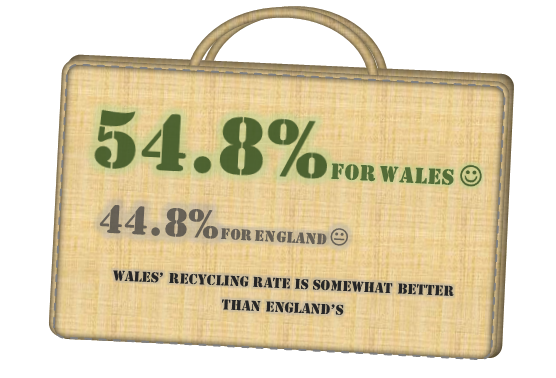 So, what about Exeter?

Well, it’s important to note that this isn’t just a straight fight between the green and the grey bins. Taking into account home healthcare waste, street sweeping and litter bins, recycling banks, brown bins, and everything that passes through the recycling centres, Exeter’s residents send on average an ant’s hair under 49% of their waste for recycling.

But here’s where we can all be rather proud: Exeter’s average household waste production (kg per household) last year put us among the twenty lowest districts in the UK. Top 20! Or is that bottom 20? Either way…high five!

Unlike most other councils, here in Exeter we operate our own MRF and run all our collections in-house rather than contracting them out to a private company. This means we can sort all the recycling ourselves and sell it for the best prices, saving over £1million of public money per year.

The way we collect the recycling – in big trucks that compact all the waste – allows us to collect more recycling mixed together (‘comingled’) in one big load. We take all types of plastic packaging, for example, whereas many other councils will only take bottles.

There is definitely scope for improving our recycling rate, though. Nearly half the contents of the average grey bin in Exeter could have been recycled. We could be saving a further £500K!

We know that you dedicated recyclers try to do your bit. This is about us all encouraging more people to get into the recycling habit properly. We paragons of recycling can be the motivators here. Let’s do it.

Here’s a funky-looking flowchart that may help: 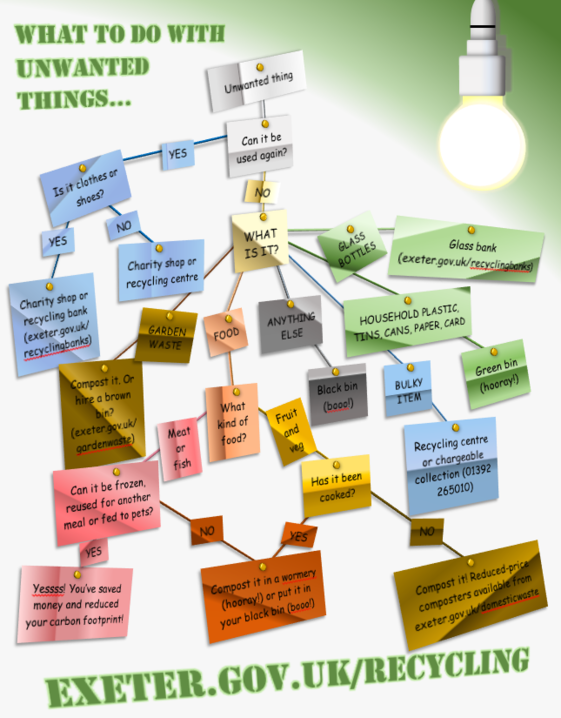